When Tomorrow is Today

As I have written in my last post I believe that Enterprise Architecture is inevitable happening, no matter if it is done the one way or the other. I personally sense a lot of tribal thinking in the Enterprise Architecture community where in the heat of the discussion I sometimes wonder why there is so much talk about two sides (e.g. EITA vs EA) or even three (three schools of EA) or towards others (IT vs Business). I personally believe that the whole is a circulatory system which is always happening: 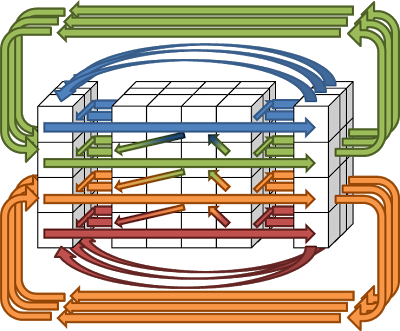 So I believe the right discussion should be along the line: how do we make the flow through the circulatory system (GLUE is just a model to reflect that) optimal instead of focusing on setting up boundaries and controls to ensure that a specific role works in a specific box. So overlaps, as described in an earlier post, is not bad if you ask me, but in fact very healthy, because to succeed not one person can decide on his own limited knowledge, but it forces people into working together, ideally collaborating or at least cooperating.

My almost 4 year old son was a source of inspiration (once again, as well as his siblings) for me, by making a great quote:


"When Tomorrow is Today",
Kalle Friedrich Schlüter (*2008)
That was just straight put where the focus should be: right now, this very moment. For him the concept of future does not exist yet. So he has to use the present to explain the future, and reality is, believe it or not, we all use that same concept, even though our grammar rules (for the languages I know) pretend that future can be expressed. As written in "Enterprise Architecting Past, Future or Present" I believe the absolute focus should be on the present, because it is the result of the Past and Leads to one out of many Futures. There is also a song from the young Billy Joel, even though is focus was not Enterprise Architecture, about the challenges of the time.

So what is my answer: I focus on the similarities, the common pattern. The things which unite Enterprise Architecture and are indeed the same. I think there is way more in common between the different approaches (and that includes Business Architecture, Project Management, Strategy, Innovation Management and many other things) than we allow ourself to accept and see. We kind of play the game of the three apes, and I wonder why.

Due to that I will focus in my future posts on something different than core Enterprise Architecture: What to learn from others is my leading theme for the next posts. Of course, as always, comments are welcome. So if you want me to look into something else which I only scratched so far then please let me know. Input from the community helps me to get my thinking straigthened.
Eingestellt von Unknown um 15:45