In my last post I have written about the concept to compare Enterprise Architecture with the Matrix. In short: free your mind and open up for all the possibilities. There is no reason to stay inside the boundaries provided by the various frameworks and models. They are helping, but not the answer. The real change happens by working with the people and there is the place where the real Enterprise Architecture is happening. With and through the people. 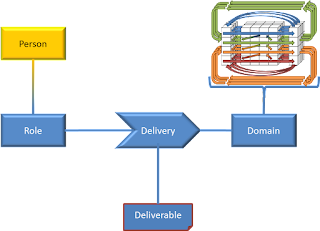 
There is a particular element I really like about Ric Philipps' post. And that is the underlying principle minimalism. Ludwig Mies van der Rohe has used that principle greatly (very subjective) for his approach to architecture. By reducing the definitions (frameworks, models, you name it) to the absolute minimum the Observer Effect is minimized as well. Highly complex models (amount of definitions and relationships) have indeed based on my own observation a high tendency to disturb and create more noise than sense. (e.g. the discussion about UML extend and include, or the various complexity models).


If you ask me the model of the world could be flat, like in discworld (despite the turtle and the elephants, that is not needed to explain it). It does work for my daily life. And even though I know that the world is a globe my senses tell me something different, because they are more sharp on experience which is directly connected to my physical experience, and almost all things I need work for that model. (Actually a map is nothing else than a 2-dimensional model of the world). But of course I am not very religious on that 2D model, most likely because I just use it and did not invent it. On GLUE i might think different, the future will tell.

Nevertheless the boxing and framing is also very useful, as Seth Godin has put it so great in his post "I want to put you in a category". The interesting thing for me is not only the boxing itself, or being trapped in the Overconfidence Effect, but especially the friction and tension created by two (or more) tribes defending their own believe and thinking (almost) to death. Of course there is a short term negative effect (and there was some very destructive examples of that in the past), but all that energy usually also creates something new, something which has not existed before. So it is very interesting to observe the heavy (and very emotional) discussion in the complexity models around Enterprise Architecture at the moment. Even though there is a lot of bad feelings on all sides I personally believe that all this negative energy has a good chance to create something new which the world has not seen before.
Eingestellt von Unknown um 19:55